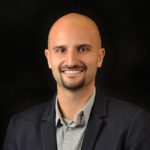 It’s hard to find someone who was born and raised in Georgia these days with so many people moving to the Peach State.  However, that’s exactly what you find with Michael Ghinga.  Mr. and Mrs. Ghinga along with 3 of Mike’s siblings came to Georgia in 1985 from Romania.  Two years later Mike was born.  Mike was born and raised in Norcross, GA.  He attended Meadowcreek High School and played basketball for the current defending State Champion Mustangs.

Life was entertaining in the Ghinga home. “Having 5 total siblings, including myself there was never a boring moment, and always someone to get into trouble with.”   One of Mike’s favorite childhood memories was the family road trips they would take. “I’ve been to Florida enough times that I should have an honorary citizenship.”

Mike’s first job was at the $1 movie theatre. That job was short lived, “I had to quit after two weeks because the smell of popcorn/butter started coming out of my pores!”  Mike tended to break a lot of things as a child, and eventually started learning how to fix things too.  Mike wanted to learn a trade, so he decided to attend Gwinnett Technical College and complete an Associate Degree in Air Conditioning Technology.  He has become kind of a nerd for HVAC. The HVAC industry has proved well, opening up countless professional avenues for him.

Mike has been in the industry for 6 years (3.5 years as a technician, 1.5 years inside sales, 1 year in account management).  He moved into his current role to focus more on building relationships and serving the customer rather than just fixing their equipment.  One of the most important aspects that has contributed to his success, in his opinion, is “having a service first mentality. Always thinking of what I can do to bring value to the table (whether our internal customer or external one). The return on that investment is more than I could imagine.”  Mike’s personal secret to success is spending as much energy serving the internal customer (co-workers/office staff/administrative dept) as you do the external ones.  According to Mike, his biggest challenge so far has been “Building my network, people can’t do business with you if they don’t know you exist. “Although being at the mercy of vendors is sometimes frustrating, Mike enjoys being able to build real business relationships with everyone.  He loves people and believes everyone has the capability to contribute to the bigger picture.  A typical day is spent putting out fires, building his network, and finding ways to add value to existing clients.  His philosophy, “Success requires no explanations.  Failure permits no alibies.” ~N. Hill

Mike and his beautiful wife for 4 years live in Marietta.  They have a 2-year-old son, Gabriel, and expansion plans are in the works to make this a family of four.  They have resided in the Marietta area of Cobb County for the past three years.  When asked what drew them to the area he said, “We love the location and all of the developments and happenings on our side of town.”  One thing most people may not know about Mike is that Romanian is his first language and English is second.  He tries his best to teach his son his native language, but that can be challenging due to the fact that his wife is not Romanian and does not know the language fluently.

The furthest place Mike has ever visited is Los Cabos, Mexico.  The scenery was beautiful but the ocean currents could be quite scary at times.  However, his favorite place he has vacationed is Jamaica.  He first visited Jamaica two years ago, but is scared to go back because “I’m afraid it wouldn’t live up to the memories of the first trip.”

To de-stress after a long day or week, Mike likes to bike or walk, preferably on a beach.   He picked up bicycling this year, and loves riding on the Silver Comet Trail, and likes to make sure he bikes at least once per week.  Mike’s greatest personal achievement is teaching himself how to play tennis, never playing before.  After knee surgery, Mike could no longer play basketball due to the stress it put on his knee.  Tennis was a much better fit for his body.  He learned how to play from youtube videos and over the years has become a pretty solid player.

Mike decided to become involved with IFMA Atlanta because of how active our chapter is.  The Atlanta Chapter never disappoints when it comes to cool and interesting locations for events.  Mike’s IFMA Atlanta membership has benefited him in many ways.  Especially being a business partner.  Having the opportunity to get to know FMs outside of the 9-5 office environment really sets the stage for building deeper relationships. In my current role, maximizing exposure to FMs is key. The associate member networking is also very valuable. We all want to bring value to the Facility Manager, and working together on that exponentially increases possibilities to do so.

The Making of a President

The Making of a President ~ Bio of Christy Jellets, IFMA Atlanta President 2010/11...

Check out the new Issue of OC Atlanta

Of Sense and Sustainability