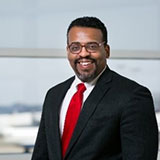 With more than 30 years of change, utilities and facilities management experience, Charles continues to serve the industry through his current role as Utility Manager for (ATL) Hartsfield-Jackson Atlanta International Airport, the world’s most efficient and busiest airport with over 110 million passengers annually and numerous volunteer organizations. Under his leadership, ATL became the first U.S. airport to have its energy management system certified to the ISO 50001 standard, which has won the airport numerous awards like the Environmental Leaders 2016 Top Project Award; the Association of Energy Engineers’ Institutional Energy Management Award for Region 2 in 2016; and the International Facility Manager Association (IFMA) Facility Achievement Award in 2016. Completing Harvard University’s Executive Program in Public Policy, Charles holds several graduate degrees and certifications.

Selected as one of the top 75 environmental leaders by the Environmental Institute in 2018, Charles promotes efficiency and sustainability in and outside the airport. He served six (6) years as chair of the ATL EcoDistrict, the first registered EcoDistrict ® at an airport. He is the current Vice President of the International Facilities Management Association Atlanta Chapter, one of the largest chapters in the world. Nationally, Charles has served with the Airport Cooperative Research Program (ACRP) of the Transportation Research Board as an ambassador, panel member and chair and is currently an ambassador emeritus serving in other capacities. His efforts with ACRP led to the creation of the first guidebook for water efficiency management at U.S. airports, ACRP Report 154, released in 2016. He is a founding member of the United Nation’s Atlanta Regional Centers of Excellence. Charles serves as an advocate for continuous improvement on councils, boards, publishing articles and speaking around the world.