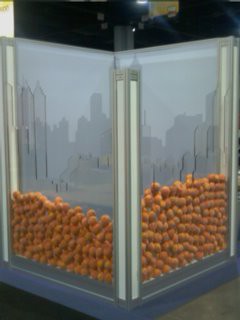 By all accounts the 2010 IFMA World Work Place was a huge success.  Our own Atlanta chapter, as the hosts of the event, also had a well-regarded presence at the event.  SCAD students designed an innovative booth which featured a way for visitors to help leave their mark.  People who stopped by the booth were handed an artificial peach and a marker and were asked to write whatever message they wanted.  Those peaches were then placed in display walls and became a part of the booth itself.

Out of those peaches 29 were placed by people who identified themselves as being from Atlanta, and 13 were placed by folks who claimed that they were from other countries.  Many of the messages thanked the Atlanta chapter for its hospitality or indicated what a good time people were having at the event.  Here is a small sampling:

Check out some the whole list of what people wrote on the peaches here!

Pass the Logo – Your Help Needed!

IFMA is putting together a video for the 30th anniversay that will be premiering...

In the video below, Atlanta Chapter President, Christy Jellets challenges other IFMA chapters and...

My week in San Antonio for IFMA World Workplace 2012 was amazing and filled...

I’m writing this fresh back from a wonderful 2012 World Workplace in San Antonio,...